Scientists, researchers, clinicians, and care practitioners from all over the world converged into San Diego this August for the Alzheimer’s Association International Conference® 2022.

The excitement in the air was palpable—researchers were eager to share their findings and connect with other professionals and scholars. The event provided unparalleled networking opportunities to support collaborations and the exchange of ideas.

The sheer logistics of bringing together 5,000 dementia professionals for a week-long meeting to share their work and accelerate dementia research was quite impressive. Conference attendees had to prioritize their specific interests so as to attend as many  of the 500 podium presentations and 150 oral sessions as possible, and viewing as many of the nearly 3,000 poster presentations, in the time between nine plenary sessions. Most of the information presented was being made available for the very first time. 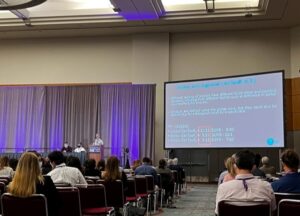 As a dementia care professional, I attended this year’s conference with an interest in learning the directions that the research is taking and the new findings that can be of significance to the families and patients I serve in Santa Barbara. Faced with a devastating disease, caregivers and affected families are eager to receive good news. And looking at the trove of information presented with their interests in mind, I would classify it in four basic areas: prevention, diagnosis, treatment, and symptom management.

Prevention—All data points to the wisdom of reducing your risk!

There were plenty of new findings confirming the benefits of prevention strategies in delaying the on-set of the disease, slowing the development of symptoms, and mitigating their severity.

The bulk of the research focused on vascular strengthening strategies, and the consensus is on exercise!

We have known that physical exercise has the potential to slow down the progression of the disease for quite some time, but researchers are also demonstrating reduction in the presence of the proteins β-amyloid and Tau (which are associated with Alzheimer’s disease) in the brains of those who exercise (Carmichael, et al.). A team from Vancouver, Canada (Noseworthy, et al.) found that exercising outdoors has even greater wellness and cognitive benefits!

Researchers are also focusing on building cognitive reserves, as in strengthening the brain itself. One study from the University of Indiana (Manchella, et al.) surprisingly found  that social bridging—defined as networking with persons of different social groups, races, or religions—creates resilience against cognitive decline and it increases the size of the brain, particularly in the amygdala and left frontal lobe.

The message is clear: To fortify your brain and reduce your risk of developing Alzheimer’s, find some form of physical exercise you enjoy doing, give preference to outdoor activities, and do it with friends or others in the community. A shout out to all our pickle-ball friends: Carry on!

In the absence of a conclusive test tool, clinicians have relied mostly on symptom observation and brain imaging to formulate a diagnosis of Alzheimer’s, incurring a high incidence of misdiagnosis.

Researchers have worked on new diagnostic tests, and a test that measures Beta Amyloid was approved this May by the FDA. Fugirebio, the makers of Lumipulse G β-Amyloid Ratio (1-42/1-40), were present at the conference and expressed the hope that the test, which uses spinal fluid, will soon become standard of diagnosing for patients everywhere. 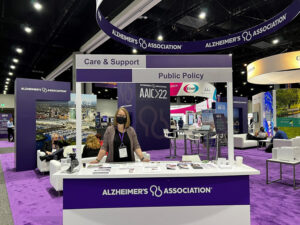 Also present at the conference were representatives from C2N Diagnostics. They are the makers of PrecivityAD™, another β-amyloid test expecting full FDA approval soon. It uses a blood sample to identify whether a patient is likely to have amyloid plaques in the brain. Although it is already available in most of the country, PrecivityAD is not currently covered by private insurance providers, or by Medicare and Medicaid (MediCal in California).

Researchers are also developing tests for detecting the presence of Tau, which can be used to support a diagnosis of Alzheimer’s.

Although the development of these tests is a great advance in doctors’ ability to provide patients with a reliable diagnosis regarding Alzheimer’s, it is unlikely that any single test will be conclusive on its own results. They must be used in connection with other biomarkers for a complete diagnosis, and the research community is still studying what their results imply in terms of prognosis for the progression of the disease. Over 400 studies were presented at this year’s conference on this topic alone.

Treatment—New focus on sleep and inflammation

After years in trials where pharmaceuticals were found to be successful in reducing β-amyloid in the brain but did very little to halt the progression of the disease, the scientific community seems to be shifting attention to other possible factors in the search for a treatment for Alzheimer’s.

While β-amyloid and Tau continue to be the top targets for those studying treatment options, researchers are also looking at brain inflammation and its relationship with brain processes that happen during sleep.

It is during sleep that the brain cells diminish in size allowing for the fluid encompassing these cells to flow more freely through the brain, and in doing so carry away debris and waste created by normal brain operations, broken down particles of proteins including β-amyloid. Brain waste that is not properly “washed away” during sleep may clump and clutter, interfering with normal brain function. This brain-cleansing system is known as the glymphatic system and appears to be malfunctioning in Alzheimer’s disease patients.

The AlfaSleep project, in Barcelona, Spain, is studying how sleep deprivation and neuroinflammation may play a role in the association of sleep disorders and cognitive impairment.

On the other hand, a Dutch study is investigating how a reduction in the fluid found in the spaces around brain cells may leave less space for waste products to be cleared from in-between the cells.

An Australian study is looking at the extent to which inflammation is related to disease progression in patients before and after symptoms of dementia are present, and how inflammation levels can also be a biomarker for the disease (Cherbuin, et al.).

In addition, animal studies are looking for all kinds of possible triggers for inflammation, including COVID infection (Biose, et al.) and the common house dust mites (Sahu, et al.).

While a cure for Alzheimer’s still eludes the scientific community, researchers are leaving no stone unturned.

For families and professionals in the field caring for patients with dementia, management of dementia-related agitation is a matter of great importance, although one that has been consistently overlooked by the scientific community.

In the U.S., where there are currently no drugs approved for agitation in dementia patients, doctors have used medication successfully to treat dementia-related agitation. This use, however, is off-label, and many clinicians are uncomfortable prescribing medications without guidelines. Family members are afraid of using medications because of their side effects, and patients are often left in a state of agitation and despair without the relief of pharmaceuticals. Caring for patients suffering from the behavioral and psychological symptoms of dementia (BPSD) is extremely difficult and it is driving up the costs of hospitalizations and residential care for dementia patients.

In a workshop addressing this lapse in treatment guidance, Dr. Jeff Cummings from the International Geriatrics Association presented a most valuable pharmacological algorithm, in which doctors will find guidelines in the use of pharmaceuticals while utilizing their own judgment and experience in determining  which course of therapy is the most appropriate for a patient. These treatments are not to be used in place of psychosocial interventions; rather, they are to be used in addition to non-pharmacological strategies, including the use of nature, socialization, music, arts, colors, and sounds.

Soon to be published, the proposed guidelines will provide clinicians with a much-needed roadmap on how to treat dementia patients with agitation while helping families better understand treatment options.

Looking at the problem from yet another angle, a study in Zurich has found that high concentrations of the stress hormone cortisol (found in the cerebrospinal fluid of dementia patients) are associated with the severity of neuropsychiatric symptoms and their persistence or worsening over time (Popp, et al.). This in itself can open a new venue of treatment and prevention for these symptoms.

San Diego was lit purple in support of Alzheimer’s

The Alzheimer’s Association has once again done an amazing job in bringing together so many brilliant minds invested in decoding the mystery behind this disease, and we are much closer to the solutions for these efforts. The 2023  conference will be held in Amsterdam, and will be also available online.

Luciana Mitzkun is a Memory Care Specialist, author of Ahead of Dementia, Un Paso Adelante de la Demencia, and Ahead of Memory Loss. She is the Community Services Director at Villa Alamar, Memory Care in Santa Barbara, and a volunteer for the Alzheimer’s Association.